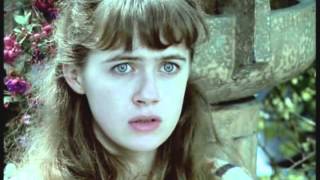 France, 1940. German troops have just invaded the country, but in the rural idyll of the family chateau inhabited by 20-year-old Mellie with her impoverished aristocrat father Alexandre and adolescent cousin Robinson, the war still seems far away # apart from the fact that Mellie's rich and unpopular fiancé André has been drafted into the army. For Robinson and his friends the same age, including the temperamental Bertrand, the war is merely a game they play in the remoteness of the blue island in the lake. Fifteen-year-old Bertrand already feels quite grown-up: when Mellie, his great love, succumbs to his advances, he is introduced to physical love. Bertrand's romantic sense of honor is deeply offended, however, when France negotiates a cease-fire with the Germans. To save his country's honor, he decides to embark on the "military defense" of the blue island: he has finally seen an opportunity to get quits with the absent enemy and to risk his life for the glory of his country. With a few playmates, an old hunting rifle and a home-made flag, he prepares to defend his realm # the blue island # against the might of the German army. When the first German armored cars, under the command of Francophile German lieutenant Frantz von Pikkendorf, arrive on the scene, the children approach them with utter fearlessness. The lieutenant accepts their challenge, seeing it as a game, but then insists that the children "beat an honorable retreat". When Pikkendorf tries to take the rifle from Bertrand, the boy shoots him in the shoulder. This leads to catastrophe: Bertrand is reluctantly shot dead by Pikkendorf. The lieutenant then accompanies the dead Bertrand back home with full military honors. After the war, Pikkendorf returns to France and visits the heroic Bertrand's grave. Once there, he recognizes Mellie who came to bring some flowers to her former first love, who she also will never forget. - IMDb